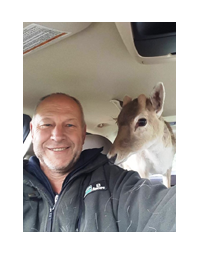 Roger Bay is a Veterinarian, director and the founder of Town and Country Vet. He works mostly with large animals. Most days he will be found out on farm, working with Mitch in our equine reproduction clinic or out in his back paddock breeding yaks. Roger offers a warm, friendly service for our customers and their animals.

Roger grew up on a Dairy farm in Te Aro, East of Waikato. His dream to become a vet started as a young laddie, getting up at 4am to milk cows and then again soon after 2pm, this was enough to realise his love for animals as well as his need to change careers, little did he know his new venture would entail plenty more early starts and long hours.

After a good few years of hard studying at Massey University he then spent a few years working in mixed practices around New Zealand.

If you really want to see Roger in his element, After many years working hard on his farm and at work he has decided to enjoy what the world has to offer and has spent some much deserved free time traveling the world with his wife and youngest daughter, currently now on a year sabbatical.

Aside from the adventures, Roger’s remaining time back home will be spent at his farm Beacon Hill, with his wife and children. They have many animals from dogs, duck, deer and yaks to keep them busy.